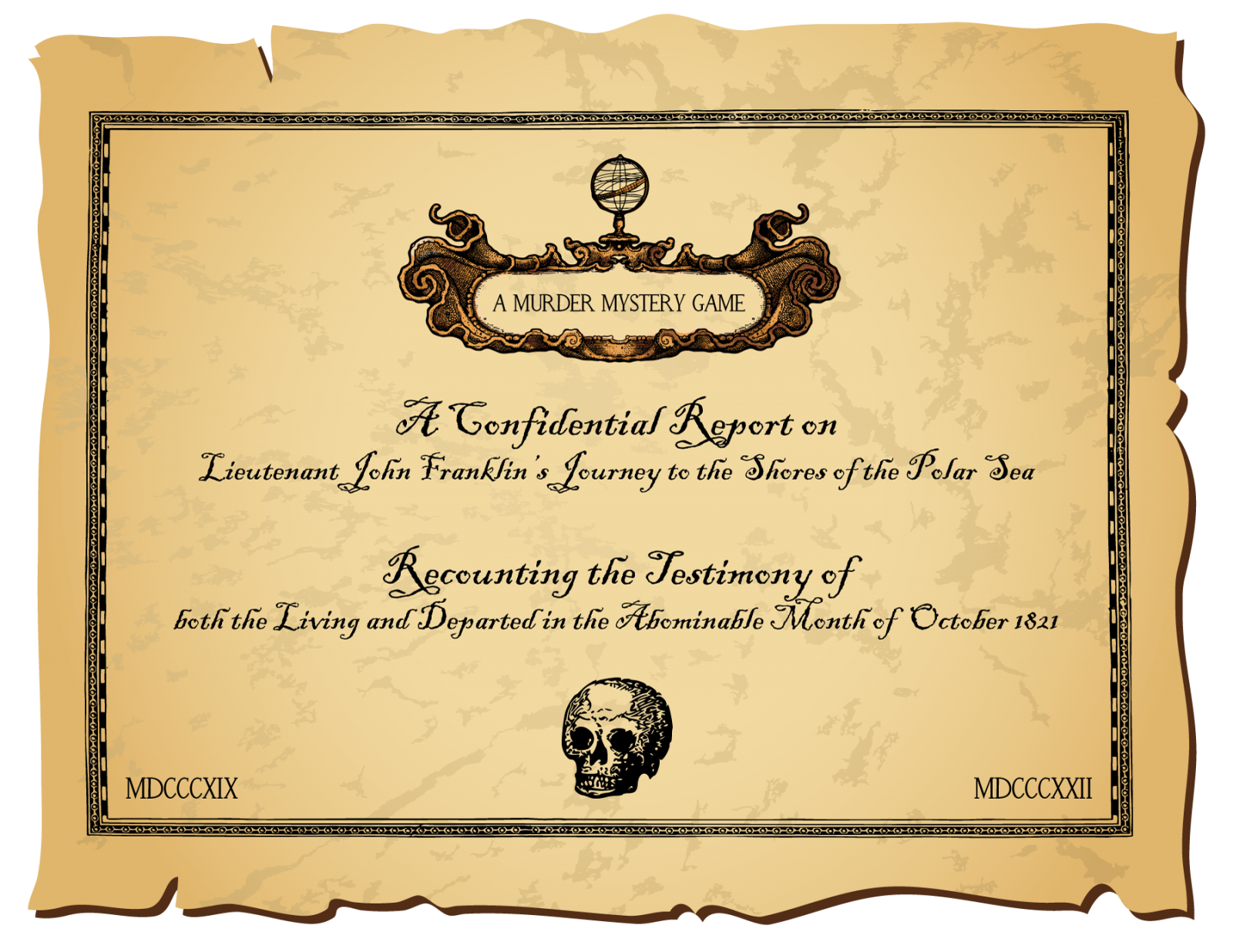 Offered here are the instructions and role cards for “Death on the Tundra”, a murder mystery whodunnit game that investigates the darkest month of the first overland expedition that saw half the party perish, two of whom by bullets. Conceived and developed by Mike Mitchell, the curator of education at the Prince of Wales Northern Heritage Centre, the game taps into the Franklin mystique to ask probing questions about the tragic denouement of the expedition. This web commemorative project provides newly redesigned game cards, although a role play during a dinner party might be a bit inappropriate given that starvation is a central theme!

Long before the HMS Erebus and Terror set sail for the Northwest Passage, John Franklin embarked on his first overland expedition to map the northern coast of North America. However, this journey became renowned not for the discoveries it made but for the grisly death of nearly half of the men including an accusations of murder of one of the voyageurs, Michel Terohaute.

This murder mystery game is a “whodunnit” adaptation of this shocking incident in that truly tragic month of October, 1821.

If you’ve never attended a murder mystery dinner it usually works like this. Dinner guests assume the roles of murder suspects and are given scripts to read. By process of elimination (and between various courses of the meal) the suspects are whittled down until the remaining participants vote to determine who is the guilty party.

The Story So Far

John Franklin and a few of his Navy companions set sail from England in 1819 bound for York Factory, with instructions to map the Arctic Coast. With the assistance of the two major fur trading companies in North America, Franklin would then attempt to rendezvous with William Parry who led an expedition by sea from the east.

After a river and dogsled journey through Cumberland House and Fort Chipewyan, the party eventually arrived in Fort Providence (now known as Old Fort Providence, just south of Yellowknife), in the summer of 1820. Yellowknives chief Akaitcho met them there and agreed to guide them to edge of the barrenlands where they could spend the winter at the hastily constructed Fort Enterprise before descending the Coppermine River to the Arctic Coast the following spring.

The following September, after charting the coast from the Coppermine River to the Kent Peninsula, the party of twenty began their overland return journey to Fort Enterprise from Bathurst Inlet. The gruelling march, harsh weather, and lack of food severely weakened the party, many of whom died of exhaustion and starvation. Those who did eventually arrive back at Fort Enterprise, found not the cached supplies they had thought had been arranged, but rather despair and more death. In the end, 11 of 20 members of the expedition died or disappeared — 9 voyageurs, 1 inuit guide, and 1 naval midshipman.

Though the trip was a disaster, the reception of Franklin’s journal, when published in England, cemented his celebrity status as the “man who ate his own boots.” Correspondence between Franklin and Richardson, the expedition naturalist and surgeon, however showed that the naval leaders had to confront questions regarding the death of Terohaute, precipitated by North West Company factor Willard Wentzel who considered his death a murder….but by whom?

It is worth remembering that, though this is a riveting story that has attracted the attention of countless Franklin enthusiasts, these men suffered greatly on this trip. There was not just physical exhaustion, but emotional and psychological anguish, which helps one understand the conditions that might have led to the deaths of Hood and Terohaute.

As noted in Franklin’s journals, winter had come early and fiercely compared to 1820. Snowfall was heavy throughout their return across the barrenlands, and lakes that were open in 1820 were now frozen. With gale-like winds, the party staggered through the ice and snow, and were hemmed in for days.

Dissension in the Party

Dissension, suspicion, and open mutiny likewise dogged the expedition, especially as the party grew ever more desperate. In September, suspected sabotage to lighten the load had claimed fishing nets and the canoes, which rendered crossing the Coppermine at Obstruction Rapids into an eight-day ordeal. This not only lost precious time, but left the expedition exhausted and ripe for the events detailed in this murder mystery. Intimations of cannibalism were also hinted at this time, as the ultimate act of survival hovered like a spectre over their daily struggle.

All the British members of the expedition were Royal Navy veterans of the Napoleonic Wars. The disciplinary practices of the high seas were an ill fit for a motley crew of voyageurs, Chipewyan Métis interpreters, and Inuit who were accustomed to the dissolute yet practical ways of Hudson’s Bay and North West Company traders. Moreover, of the British, only Back spoke French owing to his captivity as a prisoner of war in France. Thus the party had to contend with strained communications on top of the strenuous demands of a journey into unknown lands.

The Lack of Provisions

The feud between the HBC and NWC over control of the fur trade had prevented sufficient supplies from reaching the expedition at Fort Enterprise. Willard Wentzel, the NWC clerk in Fort Providence, couldn’t send European supplies because he didn’t have any. He himself nearly perished on his return trip from the Mouth of the Coppermine, spending 11 days without food.

There was also insufficient ammunition to outfit Akaitcho, whose family was reduced to using bits of axe heads as musket shot. Akaitcho, was said to have been unable to provision Fort Enterprise after members of his family drowned in the fall of 1820 – the grieving family was said to have been so ‘unhinged’ as to have been unable to provide for themselves. Akaitcho very likely also thought it a fool’s errand to provide for a party who would surely never return from such a suicidal voyage.

Terohaute’s death was the culmination of a series of such unfortunate conditions and events that the bigger question remains: why did almost every one of the British seamen survive  — none of whom had sufficient skills or conditioning to hunt or travel in the North — while all but two voyageurs perished on the expedition?  Beyond who’s responsible for Michel’s death, who should be held responsible for the deaths of the other eight Canadiens?

These considerations make the murder mystery more of a “why-dunnit” rather than a “who-dunnit.” There were only two people who could have killed him anyway as most the voyageurs were dead by that point!

To see what really happened in that dread month of October 1821, check out a timeline culled from the surviving officers’ journals.

Portraits and biographical details of the expedition members were derived from journals of the British officers, published in their original form and through the efforts of C. Stuart Houston.