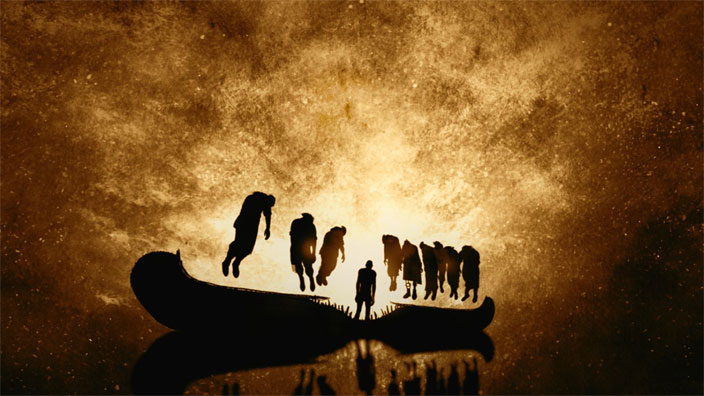 Unbeknownst to Franklin, his party set sail in 1819 at the height of the brutal corporate war between the Hudson’s Bay Company (HBC) and the North West Company (NWC) for control of the fur trade. This had a dramatic affect on the availability of both men and supplies to the expedition, which severely hampered their group as it hunkered down in Fort Enterprise over the winter of 1820-1821.

However, by the time George Back arrived in Fort Chipewyan to muster up replacement supplies, the war was coming to an end. In January 1821, Back met the recently appointed HBC governor-in-chief George Simpson who had just journeyed across the country from Montreal to Fort Chipewyan. Simpson had already dismissed Franklin as a dilletante, and was even more irritated by Back’s persistent attempt to procure the needed supplies. Back in fact wrote to Simpson three times from January 3 to February 5, annoying Simpson even more. However, Back succeeded, and within a month, resupply had arrived.

In March 1821, the HBC and NWC merged, giving rise to a single despotic entity that effectively ruled Rupert’s Land as a corporate fiefdom. In his early 30s himself, Simpson was named governor of the northern deparment, but would soon become the undisputed “Emperor of the North.” (In the Northwest Territories, Fort Simpson was founded in 1822 and named after him). A shrewd and ruthless man, Simpson would spend the next 40 years crisscrossing his vast domain, driving corporate extraction to ever new heights.

It is this context that informs the 2018 NFB animated short, “Skin for Skin.” A phantasmagoric meditation on Simpson and the fur trade, the story of “profit and loss” shows Simpson as a gaunt spectral figure who is soon besieged by the objects of his cruel exploitation.