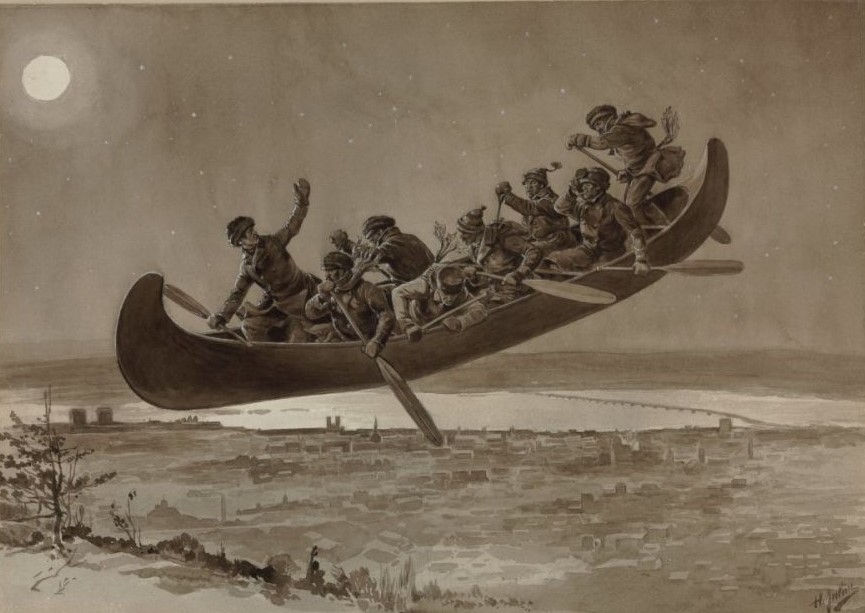 Every Canadian child is introduced to voyageur songs at some point in their education. The rhythmic and repetitive “Alouette, gentille alouette” that was well suited for canoeing is a particular school favourite.

While this musical legacy has lent the voyageur legend a certain idyllic quality, the actual working conditions of the voyageurs were far different than their glorified status in Canadian lore. Ceaseless toil, both in rowing long distances and in portaging with heavy packs often heavier than themselves, defined their daily slog. That they rarely earned enough money in any given year to retire meant they were working into old age if they survived that long.

In this regard, the voyageur singing tradition finds common ground with that of other working peoples around the world. The sea shanties of merchant and whaling ships fulfilled a similar function of ensuring crew members sang and worked in unison. Personally, the Song of the Volga Boatmen also immediately comes to mind, as its soulfulness evokes centuries of similar toil of the Russian barge haulers. It is in that song that Paul Robeson, himself the son of slaves, found a deep resonance for the experience of his people.

The voyageurs who traveled with Franklin to the Arctic Ocean, have rarely been commemorated or remembered except as the tragic casualties or as mutinous crew members of a misbegotten and ill-starred expedition. Promised up to 14 times their normal rate of yearly pay, the journey into uncharted territories cost most of them their lives. We know some of them from snippets of each of the officers’ journals, but they have for the most part remained a mystery, i.e., just more French Canadian names in the ledger books of the North West or Hudson’s Bay Companies.