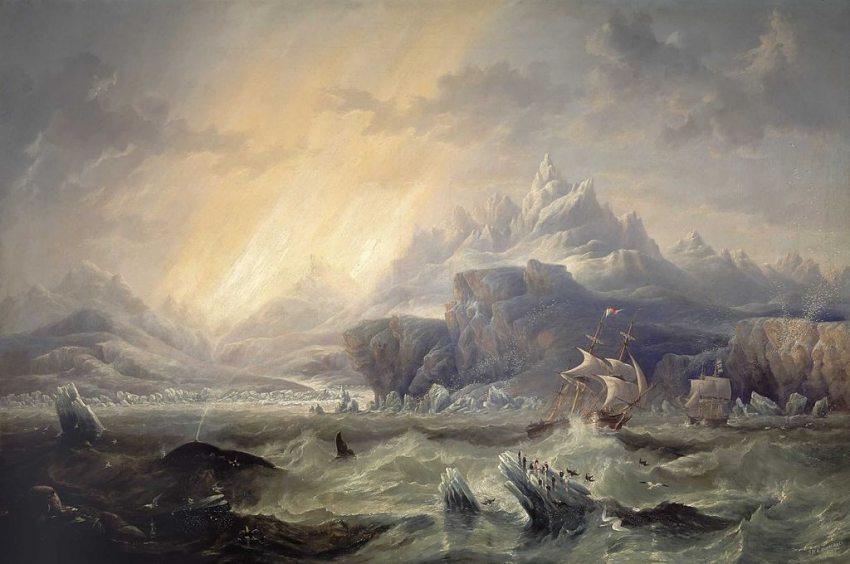 Mary Shelley, born this day in 1797, was the same age as George Back and Robert Hood. She began writing Frankenstein at the age of 18, although only achieved recognition as the author in the second edition published in 1821.

In what could easily be a passage from one of Franklin’s journals, Shelley introduces “the creature” through the letters of an Arctic explorer:

About two o’clock the mist cleared away, and we beheld, stretched out in every direction, vast and irregular plains of ice, which seemed to have no end. Some of my comrades groaned, and my own mind began to grow watchful with anxious thoughts, when a strange sight suddenly attracted our attention and diverted our solicitude from our own situation. We perceived a low carriage, fixed on a sledge and drawn by dogs, pass on towards the north, at the distance of half a mile; a being which had the shape of a man, but apparently of gigantic stature, sat in the sledge and guided the dogs. We watched the rapid progress of the traveller with our telescopes until he was lost among the distant inequalities of the ice.

Frankenstein was a sensation from the beginning, and many modern science fiction writers cite it as the very first science fiction novel. There is far more to be said about Shelley, as a writer, as the daughter of Mary Wollstonecraft, and as part of the small coterie of British poets and writers who flourished during the regency period, and this will be revisited in future posts.

However, in that same coterie that consisted of her future husband Percy Bysshe Shelley and Lord Byron, the contest to come up with ghost story also yielded John William Polidori’s The Vampyre, the progenitor of all modern Vampire stories. That story was published just a month before Franklin set out from England for his first overland expedition.

Header Photo: The Erebus and Terror in the Antarctic. John Wilson Carmichael.