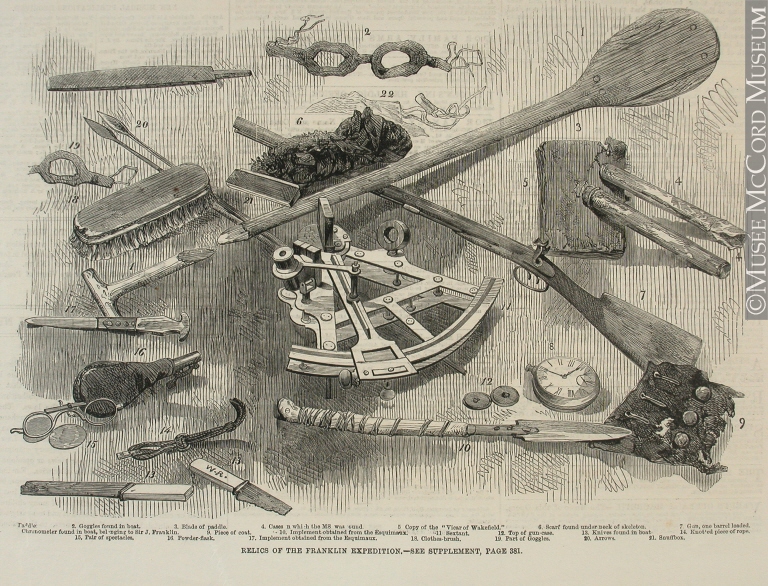 My instructions, in substance, informed me that the main object of the Expedition was that of determining the latitudes and longitudes of the Northern Coast of North America.

Like the myriad British expeditions and survey teams sent out around the world in the 18th and 19th centuries, Franklin was tasked with mapping the coast of the polar sea, including characterizing and determining the coordinates of every important geographic feature such as bays, capes, rivers, harbours, mountain ranges, etc. In this, Franklin benefited greatly from the technological leap of the preceding years.

In the 1700s, John Harrison’s invention and thirty year quest to improve the marine chronometer had revolutionized sea navigation by allowing for the accurate calculation of longitude. In 1783, the watchmaker John Arnold began mass producing a simplified but equally accurate pocket version, allowing chronometers to reach many officers in the Royal Navy.

Franklin carried the pocket chronometer Arnold’s no. 1733 on both expeditions. The minute hand was broken at White Fall in October of 1819, but was soon repaired at Norway House. This chronometer was lent to him by his friend, Daniel Moore, Esq.

The narrative of the first expedition further mentions chronometer nos. 2147 and 2148. Two more chronometers — 2149 and 2151 — are mentioned in Volume II of Franklin’s narrative as being carried by Richardson and Hood. All four are ascribed to the Franklin expedition in the master list* of chronometers in use by the Royal Navy in 1821. In contrast, the HMS Erebus and Terror carried ten chronometers each.

Conditions in the Canadian Arctic, and particularly in the coldest months, were unlike those experienced anywhere else except Siberia. Even within their dwelling at Fort Enterprise, temperatures reached 40 below Fahrenheit — cold enough to stop chronometers if they weren’t kept close to the body or in proximity of a heat source.

In 2011, Christie’s Auction sold a pocket chronometer numbered 2151 for $7,500. Was this one of the chronometers carried by the Franklin expedition, specifically Robert Hood?

* This list was recently republished by A.D. Stewart in the Journal of Antiquarian Horology.

While chronometers improved the way longitudes were determined, explorers continued to use the sextant to calculate latitudes. Essentially, a more compressed and portable form of the quadrant, a simple device that had been in use for centuries, the 1731 invention continued to be used well into the 20th century, only fully displaced by GPS in recent years. However, as a non-electrical navigation aid, it still continues to be used as a backup by some navies.

Franklin mentions his sextant freezing at points, and the brass contracting to such an extent, that it distorted the lens. Hood further noted that temperatures below 35°F were particularly hazardous for both the men and the equipment.

In 1825, Franklin was far more prepared when he embarked on his second expedition and carried the following:

In the choice of astronomical instruments I was necessarily guided by their portability. Our stock consisted of two small sextants, two artificial horizons, two altitude instruments, a repeating circle for lunar observations, and a small transit telescope for ascertaining the rates of the chronometers. We had a dipping needle mounted on Meyer’s plan, a plain needle very delicately fitted for observing the diurnal variation; two of Kater’s azimuth compasses, and a pocket compass for each officer. The atmospherical instruments were two electrometers, two of Daniel’s hygrometers, Leslie’s photometer and hygrometer, besides a good supply of mercurial and spirit thermometers of different sizes. The magnetic instruments were examined in concert with my friend Captain Sabine, previous to my departure from London; and the observations that were obtained for dip and intensity, served as points of comparison for our future results.

Header photo: Relics of the Franklin Expedition found by McClintock in 1859. Items include a sextant and chronometer. McCord Museum. M993X.5.1349.2